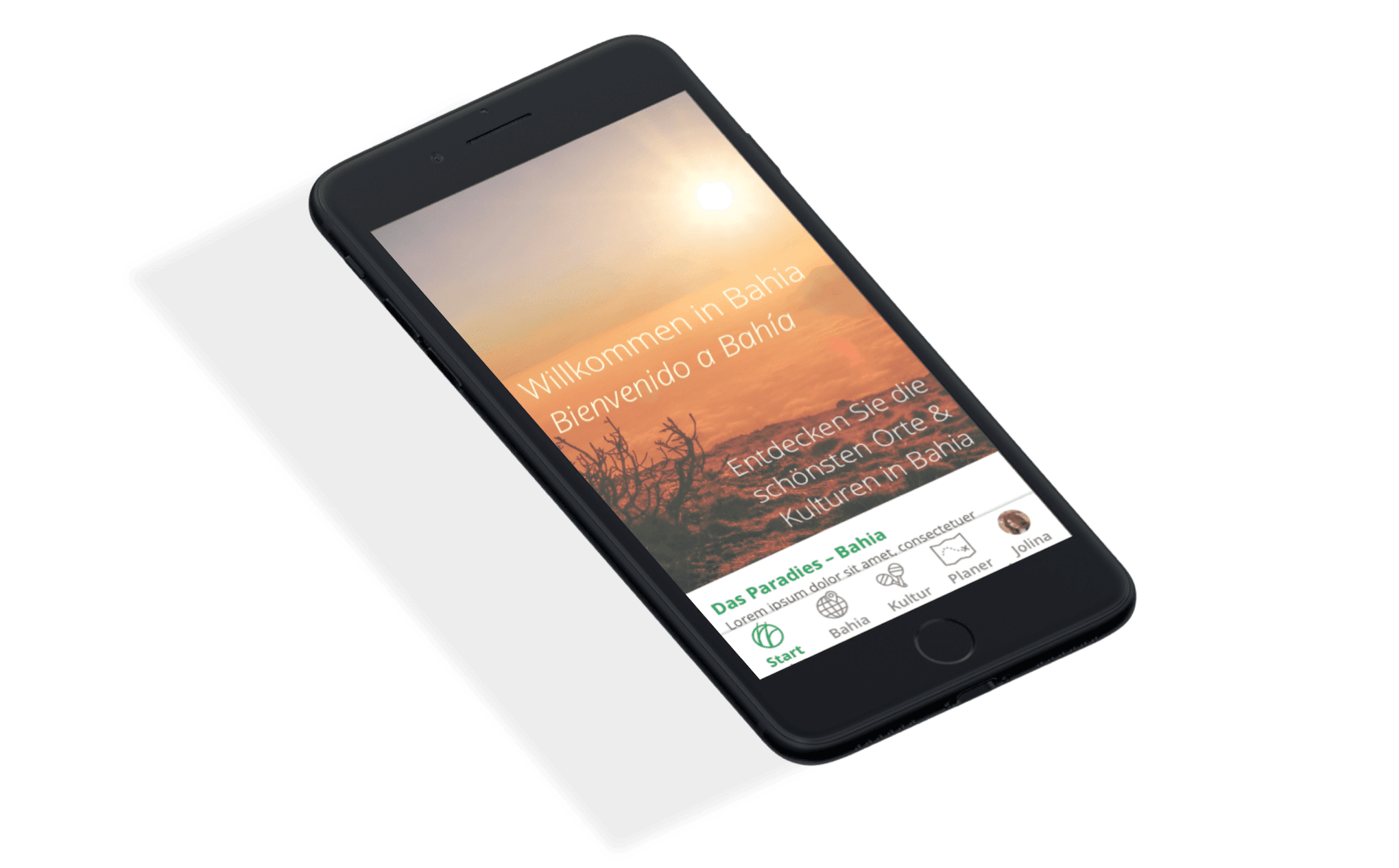 This web concept for the fictional tourism centre "Bahia" was created during my apprenticeship in summer 2017.

The tourism centre "Bahia", based in Salvador de Bahia in Brazil, would like to advertise the region to the German audience and inform potential customers about the culture and beauty of the area.
For this, the centre would like to set up a new website under the URL www.bahia-touristik.de.

Besides this, Bahia would like to hear further suggestions from the agency regarding the content and features for the website. Also, the tourism centre looks for consultation on the subjects of accessibility, search engine optimisation and further advertising measures, for a high impact.

At the end of the project, Bahia expects to see the screen designs and concept that explains the ideas, thoughts and decisions behind the designs.

Create a convincing web concept for the tourism centre "Bahia" – including a design proposal in different display sizes – which takes all the given ideas and requirements into account.
Complete the concept by my suggestions regarding the accessibility of the website, SEO and marketing.

As a part of my secondary goal, I approached the task as conceptually as possible. For this, I used the "Design Thinking" approach wherever I could, to get to learn this approach better.

I began by researching Brazil, Bahia, Salvador, vacation, the South Atlantic, and the competition for "Bahia". I then incorporated all the information in the re-briefing.
With the re-briefing as a base for the project, I began defining a target group for the product & developed four speculative personas, so that I'll get a better idea about the potential customers.

With the target group in mind, I started working on the design by selecting a suitable font, colours and images. Then I started designing the subpage "Culture", to see all the chosen design elements in context to each other. Next, I created the mobile view for "Culture", and once I was happy with the layout, I defined the layout grids for the other mobile and desktop designs.

After finishing the simple subpages, I focused on the planner, which was quite challenging because of all the different content I wanted to include here.

During this phase in the project, I used the design thinking approach multiple times, which helped me to achieve reasonably simple solutions for challenges that seemed quite complicated.

I started by collecting and sorting all the necessary content for the planner and designing a map for hotels and beaches in the area. Beneath the map, I added a slider that provides more information about the accommodations and beaches.
To further advertise the USPs of the destination, I added two short paragraphs about the area and the beaches beneath the slider.

At the end of the page, customers find a summary of their travel data and a contact form to ask questions about their trip or the booking process. At this stage, the customer also has the option to compare the prices and offers between several providers.

The trainees that finished their designs & documentation early also got the chance to design a logo for the travel agency.
I took this task as an opportunity to create a memorable logo that connects the area and agency "Bahia" with the idea of travelling the long distance from Germany to Bahia and back. I challenged myself to design the logo only using Sketch, to ensure it'll not only work in large-scale prints, but also as an icon on mobile devices.

After wrapping up the designs, I finalised the concept by adding the screen designs and some mockups and handed the work over to the online lecturer for his valuation.

The lecturer valuated my concept and the screen designs with a grade of two.
Initially, he saw my style of executing the tasks - the inclusion of the design thinking approach as well as trying to achieve as much as possible just with Sketch - quite critically.
‍
After submitting and evaluating my work, he praised that I did my research about Bahia very well, actually defined a target group and researched potential customers. He emphasised that my concept explained the ideas behind the design very well without being too technical and that I managed to add handy ideas to the design and the advertising.

He criticised, that some elements had too little white space, that the buttons had different lengths & that some of them were too small on the mobile design. He added that I wrote too much about the personas and the design elements in the concept.

He evaluated the concept and designs according to these criteria:

My structured and organised way of working through this project allowed me to master the task efficiently while including the design thinking approach and spending extensive effort on the research and conceptualisation of this project.
By executing all design-related tasks in Sketch, I learnt a lot about the design toolkit and experienced how the faster workflow enabled me to spend more time with other tasks.

During the project, I learnt how to handle criticism towards my way of working and my proposed designs. This helped me to figure out how I explain my approach to others.

For the publication on my website, I revised the screen designs & concept based on the criticism of my lecturer:

Next project in Web : "Sketch"

You want to work with me? Hit me up:
Thank you. Your message has been sent.
Oops! Something went wrong while submitting the form.
© 2019, Christian Heins •
Built with webflow